Crypto.com Reflects a Bullish Momentum; CRO May Reach Its Highs

Crypto.com coin has formed a lower low peak until the end of January; however, recently, it has begun to rise with bullish candles with higher highs. The coin is uplifting from its robust support zone, which may lead to bullish momentum in the upcoming days. The coin is ascending after closing above the downtrend line and the swing highs. In the past months, the coin has marked significant correction, after which it is moving in favor of bulls and is heading upwards. Recently, the CRO coin has broken the resistance point, is trailing towards higher highs, and has favorable volume towards bulls. 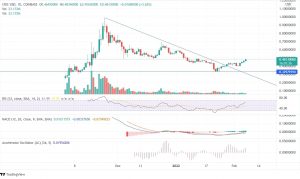 On the daily chart, the MACD line being above the signal line and the histogram chart showing green candle denotes an upcoming trend. The RSI indicator being at 61, is leading towards the overbought zone. The volume hasn’t demonstrated much favor towards bears or bulls and shows remote movement in volume bars. The coin has rejected the swing lows and hasn’t declined further.

The CRO coin has been following the long extending downtrend line from the past two months, after which it had risen. Based on the current momentum and Crypto.com price prediction, we can say that the coin might continue to trade towards its next crucial resistance point around $0.60.

On the weekly chart, the Crypto.com (CRO) got tested twice at the support line but failed to decline, and the coin took a turnaround. In the previous two weeks, the coin has rallied up with immense buying pressure.